With a proposed overnighter in the offing, I've had a look in the armoury and there's a sleeping bag-shaped gap in the weapons rack. I'm covered for 3 season stuff but with The Boy getting the Alpkit AlpineDream 700, I'm left out in the cold, so to speak. I could throw money at the problem by heading over to PHD but then I'd have to decide what, or who, gets sold to raise the money.

I'm wondering if a combination of bags might be the answer? The first 2 that came to mind were the Rab Quantum and the Snugpak Merlin, both "summer" bags on their own but possibly capable of delivering a bit more when combined. Factor in clothing eg PHD Minimus and it could be a go-er. 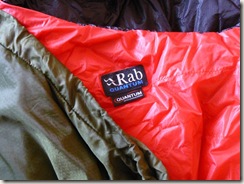 They both fit loosely, one inside the other, so that's a good start. A bit of experimentation is called for but what's the worst that can happen? I get to be cold and uncomfortable for a night? Pah! Been there, done that.

We're talking low-level camp in the CGNP. Worst case, we bug out to Bob Scott's or back to the car.

Bob Scotts is great. Warm fire and outside loo. On the bag choice. Take the Rab and a down jacket and job done. I used a Marmot Atom bag and PHD down jacket last feb in -7 with ice forming inside the tent and I was toastie warm.

Hey Martin. The only down jackets I own are of the heavy and bulky variety. (The Merlin packs down tiny and weighs very little) I'll play around with various clothing options tho'.

Bob Scott's is strictly a last resort btw. I've no' been a fan of bothies since The Culra Incident, 20 years ago :o)

In light of the forecast I'm double bagging this weekend. I've down it once before with a mounatin equipement skyline inside a kompakty lite. It worked but I think down on the outside works better (there was a distinct build up of vapour in the down bag). This weekend the skyline will go inside the hydrogen.

Ah yes, the thorny issue of the "dew point". I'd be interested to hear how you get on with that, Baz.

I'm not sure whether the situation was caused by the sleeping bag filler (hollofil 7)or the fact that the doubled up bags have an extra two layers of cover material that reduced breathability. Similarly if the outer bag wasnt warm enough then a dew point inside the system would be another reason.

The system I'll use at the weekend will be of two down bags, so we'll see. Incidentially the skyline is filled with 600 fill down and the hydrogen 800 which again may have a bearing.

The trip was abandoned so no testing of double bagging was done unfortunately.

Bummer! Hope you get another chance sooner rather than later. I'm no stranger to thwarted plans myself.

Nothing serious, I hope? I've got one slightly "dodgy" knee but Ibruprofen and a neoprene brace usually takes the edge off.

I can never make up my mind whether I can justify a proper warm down bag. I use the Snugpak Hawk thing for the winter (rated to -5 I think), and I've got a silk liner as well, which covers most of the likely conditions I'll encounter. I like the idea of something lighter & less bulky, but the ones that'd make a really noticeable difference are awfy dear.

Plus, I've generally got a wet dug in the tent, so down might not be the answer anyway. ;0/

So - why don't you just work out the best solution, and I'll no' have to think about it, eh?

Got the brace and drugs along with stick option. But need surgery to fix.

Scott, I like the idea too but how often am I gonnae get out and actually use the damn thing?

That was rhetorical btw :o) Maybe we should carry in some jammies?

Baz, my sympathies and good luck for when the quacks get around to sorting it out.

That reminds me must email HR about the BUPAS cover...

Good call on the bag thing. I'm looking at PHD's version soon and I've got high hopes.
The only thing that worries me is condensation between the two bags. I think for once less clothes on and more body heat going into the down will be a good idea.
It sounds cozy though.
And panicky, the PHD bags don't have zips.

PTC - that may be the way to go. I was warmer in my sleeping bag once I'd removed the base layers I was wearing and the bag warmed up. I was using an Hunka bivibag over the Hydrogen. On another occasion that is.