...As Bon Scott once sang. Actually, there is. Our wild-camping English cousins are breaking the law every time they pitch their tents anywhere other than their gardens. If you want to save them from a life of crime, Darren has started an e-petition here.

I get the distinct impression tho' that some of them don't want to be saved. Tough titties. It's a rubbish law and should be scrapped in favour of something along the lines of our Scottish model. (There we go, leading the world again).

The Boy Hope is offering a Buy One, Get One Free on beers for anyone that signs*.

This week, I have mostly been playing Gears Of War. I've wanted a shot since I saw the trailer, yonks ago. All superb graphics and Mad World soundtrack. I've enjoyed it immensely. 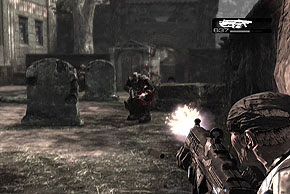 The fact that one level featured a garage has nothing to do with it.

So I finally got my car back, nearly 2 weeks after it broke. It's a sorry tale of false promises, incompetence and non-existent, nay absolute shit, customer service. They're Ignorant Bastards of a different sort. They made me angry and I don't like being angry. I'm an easy-going, laid back laddie and that's the way I like it. This last fortnight, I've been irratible and generally hacked off. Missing a chance to get out on the hills in the best winter weather we've had in a long time only made me feel worse.

But, at the end of the day, they've lost 2 customers. You see, The Future Mrs D had her wee car booked in for an MOT at the same garage. They failed it. They wanted to charge her a 4-figure sum and an indeterminate amount of time to fix it. She told them to "F**k Off!" and took it to Kwik Fit who did it for a few hundred the same day.

Wish I'd done that. But she's great that way and I can only marvel at her. Next time my car breaks, I'll chuck her the keys and my credit card. It'll be quicker and cheaper.
Posted by Big Kev at 22:26 No comments:

So I stopped procrastinating and announced, publicly, that I would, this very weekend, go for a walk. The weather didn't look great but that wasn't going to stop me. And so, with the requisite fannying aboot out of the way, I set off for Tillicoutry.
The journey along the A91 wasn't as scenic as I've seen it. Patchy snow in the fields and the tops hidden under a blanket of grey. Arriving at 11am, the rain started. No problem, it'll be snowing higher up.
Kit choice for the day was slightly retro; I'd dug out my Buffalo Mountain Shirt, Jack Wolfskin Greenland Pants, Brasher Hillmaster GTX boots and matching Berghaus Paclite Smock and troo's.
As the rain looked like it was here to stay, I donned my Paclite outer layers and set off. The walk up thru' the Mill Glen was a treat; the rain had swollen the burn and the waterfalls were in full swing. It's a great wee walk in any weather and worth half an hour of your time if you're ever up that way. Leaving the glen, I cut up towards Kirk Craigs and picked up the path that traverses the hill above the Gannel Burn. Shortly after, I hit the snowline. And that's when my troubles started, You see, I'd re-packed my bag when I was back at the car, ditching stuff that I didn't think I'd need. Stuff including gaiters. Big mistake.
As I hit the deeper snow, I could feel the tell-tale sensation of melting snow below the ankle-line. No problemo. Dig a finger in there, scoop it oot and carry on. As a plan, it was doomed to failure.
The path that traverses above the Gannel Burn goes from a reasonably wide affair to a deeply eroded, narrow, miniature slit-trench the higher up you go. Not a problem in dry weather but with rapidly thawing snow and pissing rain it had turned into a slush filled horror fest. Even where it wasn't thawing, the snow was that wet, slippy kind that affords no purchase for the feet. Worse, I was the first person to head up that way so there was an added element of breaking trail. Somebody had come down the path but the bugger's feet were so small as to be useless for planting my size 11's in. 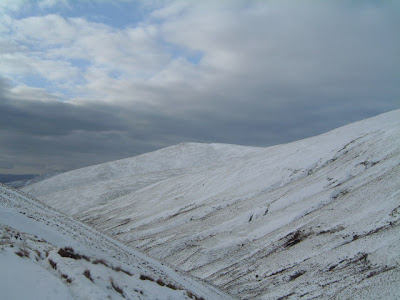 Now, the old me would have said "F**k it. This is rubbish. Let's go home, smoke fags and watch the telly". But not today. I was actually enjoying myself in a perverse kind of way. My boots were awash but my feet, like the rest of me, were warm. The wind was on my back and the sound of rain, and occasionally hail, rattling off my Paclite exterior was oddly comforting. I knew my usual lunch stop was up ahead and that I'd find deep snow, and therefore shelter, close by.
I was nearly there and looking forward to the rest when, head down and concentrating on Mr Size 5's footprints, I put my left leg straight in a boggy bit, right up to the knee. That woke me up. 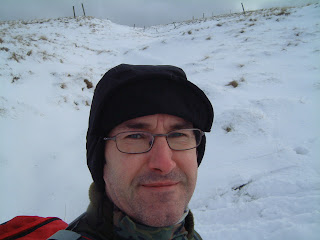 On a wee bit further and there was the snow bank, right where I knew it would be. Dumped the pack and stamped myself a deep seat out of the wind. The next hour passed in no time at all. Flask of coffee, pieces and Mars Bars were consumed to the mixed sounds of hail, wind and complete silence. It's what I come here for. I was back.

Re-fuelled, it was up and off to Kingseat where the views were non-existent but that didn't matter, just being there was the thing. Dropping back down, I picked up my trail and slipped and slithered my way back the way I'd come. Still smiling in the teeth of a biting wind. Great stuff.