The Man In The Arena

If I wrote what I wanted to say to those who sat back and did nothing, those who say "I told you so" and the ones with the smirk upon their apathetic coupons, I'd run the risk of having this blog removed and be banished from my beloved OM.

So I left them with following :

“It is not the critic who counts: not the man who points out how the strong man stumbles or where the doer of deeds could have done better. The credit belongs to the man who is actually in the arena, whose face is marred by dust and sweat and blood, who strives valiantly, who errs and comes up short again and again, because there is no effort without shortcoming, but who knows the great enthusiasms, the great devotions, who spends himself for a worthy cause; who, at the best, knows in the end, the triumph of high achievement, and who, at the worst, if he fails, at least he fails while daring greatly, so that his place shall never be with those cold and timid souls who know neither victory nor defeat.”

No doubt the pish-takers will be along soon enough but, for now, I can no longer be arsed with them.

Who can it be?

Season 4 of Battlestar Galactica went off on its' "mid-season break" last week. The writer's strike had delayed filming but we're promised it'll be back in early 2009. Rumour has it that the writers are happy with the ending of this, the final season of BSG proper. After that, there is talk of "prequels". I can't wait.

The mid-season finale, Revelations, was possibly the best piece of TV I've seen in the last decade. I've said before, the cast are wonderful, the writing and direction way ahead of Hollywood mainstream. For 45 mins, I was rivetted to the sofa. The ending wasn't what I expected but it was perfect, nonetheless. 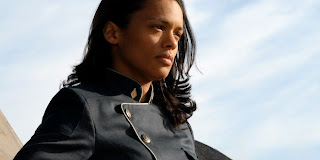 Seek it out, I urge you. There really is nothing quite like it.
Posted by Big Kev at 12:41 No comments:

Buying kit is one of life's guilty pleasures. There, I've said it. Doesn't matter how much I have, there's always room for more. Usually. Every 6 months or so, the pleasure wears off and the un-used stuff in the gear pile starts to talk about me behind my back.

So I'll make a wee pile of things that I'm willing to part with; kit that's been used once or never used at all. It's all good stuff too. In the unlikely event that I've bought a turkey, I'll bin it rather than fob it off on the unsuspecting. And the object of the exercise isn't to make a profit. That rarely happens. More often, I'll break even or sell at a slight loss. I don't mind either way because I like the idea that the gear is going to somebody who might actually use it. Spread the joy and all that.


For the last several years, I've used Ebay to facilitate these transactions and, just last weekend, listed several items that were ready to be passed forward.

Imagine my surprise when, after initially logging in to check how it's going and to answer the inevitable daft questions from interested parties, I'm greeted by a message from Ebay. I forget the exact wording but it was along the lines of "If you access Ebay from anywhere other than your "normal" computer, we may suspend your account and you will have to call us and verify your identity before we re-activate it. We're doing this for your own good. Have a nice day."

No more accessing Ebay from work then? Or from any of the other 3 PCs we have in the house? That's a bit pish.

It got better. Continuing on to My Ebay, I spotted an "alert" in amongst the daft questions. It seems that one of my listings contained an "inappropriate link" and had been removed. WTF? The link in question was to a review of the Vargo Triad Stove on backpackinglight.com and complied with Ebay's own listing policy. I have an option to edit the description and re-list the item but it'll cost me the normal listing fee. I may be eligible for a refund of my original fee but that's not a given. I think I'll pass, thanks.

Digging around, I found that, as well as no longer being able to leave negative feedback for crappy buyers, Ebay (presumably in cahoots with Paypal) can withold payments to you for up to 30 days or until you receive positive feedback. In fact, going by the fury and frustration on the user forums, it seems Ebay can do whatever they damn well please.

When a business forgets who it was that actually built the ivory tower they now sit atop, it's time for the builders to take their custom elsewhere.* I'll take my chances with the online classifieds from now on. It's highly unlikely, but maybe I'll even think twice about that next purchase.


*That wee Ebay link will be removed forthwith.

Unprompted by neo-colonialist guilt and bucolic-vision free, I signed up with the National Trust for Scotland. The facilities I used and paths I walked recently, were enough to convince me that it was the right thing to do. 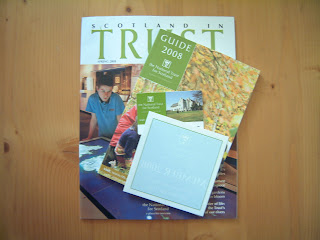 I'll offset the money by cancelling my membership of The BMC. They do naff all* for me anyway.

Came back from Stirling on Saturday to find a card from the postie. Something wouldnae fit through the letterbox. I had an inkling about what it might be but couldnae be sure.

So, this morning, I nipped in on the way to work and picked it up. 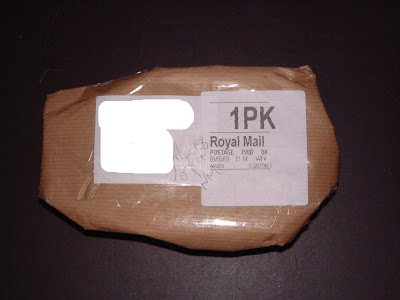 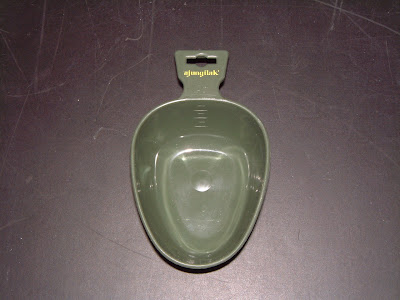 Handy?
Ah right. I'd stuck a bid on a wee Ajungilak cup on Ebay on account of it being a) a nice shape and, more importantly, b) marked in 50ml increments. (I wanted to avoid future "soup" incidents when re-hydrating stuff).

Unfortunately, around the same time, I'd ordered an Optimus Terra Solo pot which is also marked therein.

Not to worry. It didnae cost much and I'm sure it'll get used. Probably in the next couple of weeks, in fact.

The Harbinger of Oh Noes

The black steel is dead.
Luminous evil stares,
The fall out of our lives.* 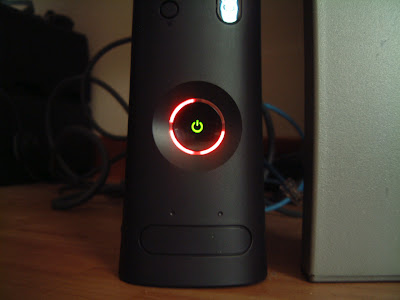 *My XBox is broken. The dreaded Red Ring of Death. I'm taking it back to the shop.

Update : After checking that my XBox was indeed broken ( not, they insisted, that they didn't believe me. They just needed to see it for themselves before sending it back to Microsoft) the boys whipped out my units' hard drive, installed it in a replacement unit and fired it up to check that it was all working. And that was it. No charge and no fuss. All my settings and downloaded maps etc intact. And my original warranty still stands.

So a big vote of thanks to the lads at gamestation in Stirling. That's what I call customer service.

Now, back to being a bit rubbish at Halo.
Posted by Big Kev at 08:06 No comments:

Outfitting The Boy for a night in "the wilderness" was never going to be hard; he's as tall as me and has the same "built for speed" physique. If nothing else, he would at least look the part.
Gear was selected for maximum comfort but the ruckies, although bulky, were re-assuringly light. A good thing as I wanted to make this as enjoyable as possible and he'd be carrying all his own gear in.

We arrived at The Linn of Dee car park at 5pm, after a mooch around Braemar Mountain Sports (energy gel shots for him and a Thermarest Ridgerest for me), where my usual fannying about was cut short by his desire to be off. 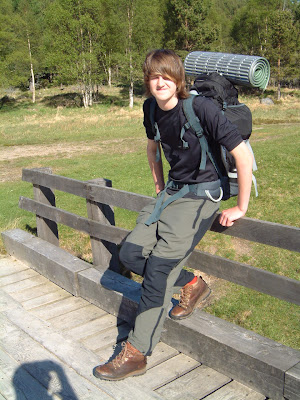 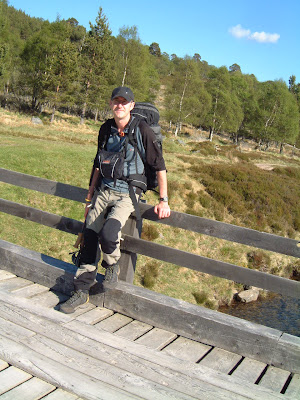 Son & Father
The walk out to Derry Lodge was a warm one, stopping every now and again to take in the views fore and aft. "Hiya's" and "Hello's" were exchanged with everyone we met along the way. Passing Derry Lodge, I tactfully ignored the wifie having a pee behind the rescue hut (The Boy never noticed). He liked the look of the pitch I'd used last week and had pre-selected it for occupation again. I'd warned him that it might be busy but, despite the weather, there were no tents on our side of the river and only three on the other.

He was keen to get a brew on so clearing the site of pine cones and sticks and getting the tents up took maybe half an hour, if that. A quick demo of how to set his stove up and he was away. In fact, he was sitting down to a cuppa before I was. 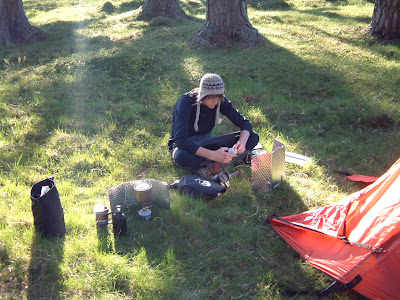 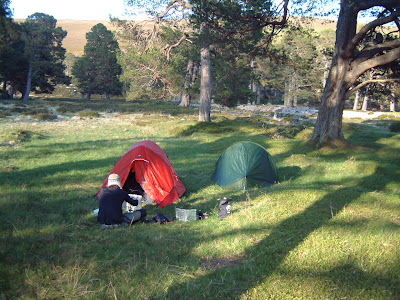 The Red & The Green
He'd previously poured scorn on the idea of eating dehydrated food but he set about his Chicken Korma and rice like a man possessed, declaring it "tasty" between mouthfuls. 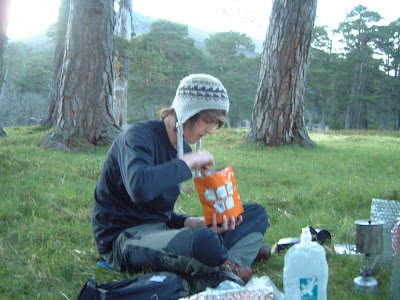 Eating al fresco (with added midgies)
The rest of the evening was passed wandering around looking at stuff, snacking and drinking hot chocolate. A couple of deer being weird was the only distraction. We turned in at around 11.

I had a pish night's sleep and, as I lay there for the umpteenth time, listening to the deep breathing of The Boy next door, I resolved to a) research bigger one-man tents, b) buy an inflatable pillow and c) invest in a warmer "summer" bag. 12 feathers wrapped in Quantum doth not a sleeping bag make. When the birds started singing at 3:30, I knew I was on a hiding to nothing. I finally declared the game a bogie at 6:00. 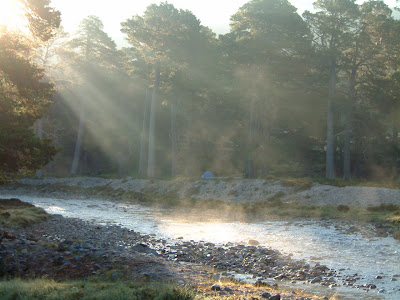 Worth getting up for
I spent the next couple of hours drinking coffee and watching the wildlife, finally rousing The Boy at 8:00. He immediately set to breakfast like an old hand; stove on, drink selected and muesli prepared in 5 minutes flat. 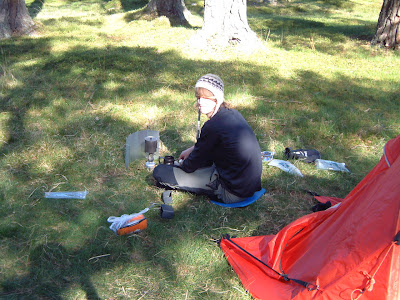 Another couple of hours mooching around, enjoying the morning and finally packing up at around 10:00. 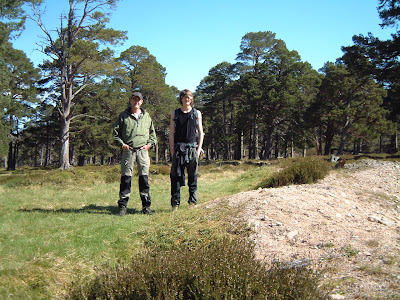 Happy Bunnies
The only plan for the day was head for the car and get to Braemar in time for lunch. The plan was a good one and went well. We bounced back along the track, stopping frequently to watch the herds of deer, exchange greetings with smiley people and generally having a great time. 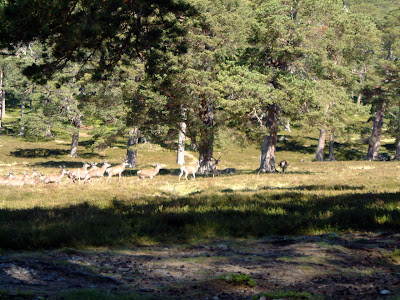 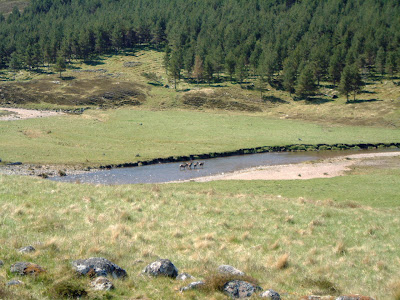 Deer cooling off (The Right Eye Deer Gang?)
I'd explained the concept of The Ignorant Bastard to The Boy beforehand and I feared we might not find one but then, only 10 minutes from the car park, there she was. The body language gave her away; shades on, head down and striding out with a purpose. Sure enough, our "Hiya" and "Hello" were ignored and much hee-hawing and sniggering followed. Her lugs must've been burning. Our grins outshone the sun. 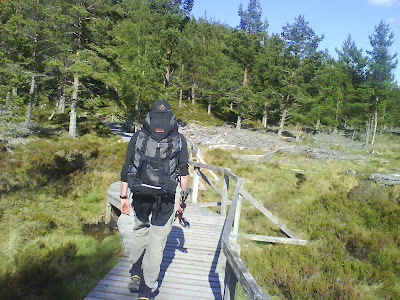 Still laughing yet
No fannying about in the car park this time either and we were at the Hungry Highlander by 12:30. Food selection was easy; beefburger for him, Venison burger for me. All those deer had put ideas in my head. 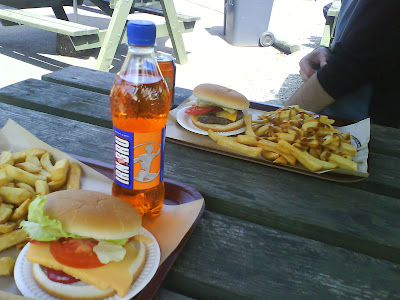