At long last, a spell of decent weather. I should've known really, that Wednesday would be the day, because Summer last year was on a Wednesday too. According to the weather boffins, it's likely to continue until Sunday so that'll be a whole 5 days. Unbelievable! It could almost be 1976, all over again. 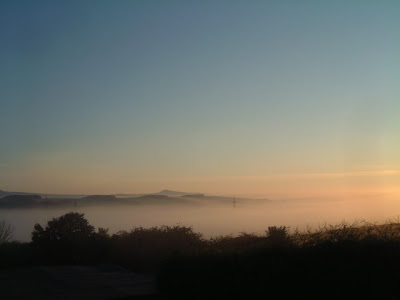 It hasnae rained for nearly 3 days tho' so I expect there'll be drought warnings along soon enough.

Bloody typical that the good weather comes along mid-week as well. The Beeb and Triple Echo must be gutted; if only they'd scheduled The Great Climb for this weekend. The Weather Gods must be pishin' themselves. And 'twas ever thus.


Welcome to Scotland. Hope you packed your wellies.
Posted by Big Kev at 07:44 4 comments:

My wee Lomonds sojourn was the first opportunity I'd had to try out the Deetfree Insect Repellant. It being a warm day with only a gentle breeze, there were plenty of flying critters around. Nothing seemed to be biting but I was getting a bit cheesed off with things buzzing round my head and just generally being annoying. So, at my traditional "juice stop", I whipped out the bottle and proceeded to apply it to my legs and lower arms.

While I was loafing about on top of West Lomond, I noticed that my hairy pins had developed a slightly distressing "wet look". I have to confess that I hadn't read the application instructions and, not wanting to get my hands covered in oil, I hadn't rubbed it in. However, there seemed to be a fair few dead things sticking to me so I assume it not only repels beasties but kills them as well. So far so good.

On returning to the car, I did my usual of sitting in the boot, letting my legs dangle and enjoying the breeze wafting round my feet. It wasn't until I climbed into the driver's seat that I noticed the dark stain on the seat covers. Worse, on arriving home, I walked round to the back of the car to get my stuff out of the boot and saw two large oily patches on the back bumper, corresponding to where I'd been dangling my legs. The patches were still there several days later so it's long-lasting too. (The Future Mrs Duncan kindly offered to wash my car but even her prodigious cleaning skills couldn't entirely shift it)

I'll need to remember to pack an old towel for wiping-off duties next time. Or, try rubbing it in and see if that makes a difference. I think it could be a problem using this stuff on overnighters because I really wouldn't want to get it on a sleeping bag, for example. I'll probably save it for day walks and use the Skin So Soft for anything longer because, as it's a Dry Oil, I've never had any bother with getting everything covered in it.

I'd still give it 8 out of 10 tho' and say it's worth trying if, like me, you're not entirely happy using something on your skin that can melt plastic.
Posted by Big Kev at 08:44 No comments:

Tuesday 24th July (My Birthday)
As soon as I looked out the window, I knew there was no way I could face driving all the way to Glenshee. The weather was far too good to even contemplate sitting in a car for 2 hours. The Lomonds looked awfy appealing and so, with the minimum of fuss, I threw some food and drink into a bum bag, hopped in the car and set off. Half an hour later, I was parked at Craigmead and ready for the off. The arrival of a minibus full of elderly Ramblers was all the incentive I needed to get going. 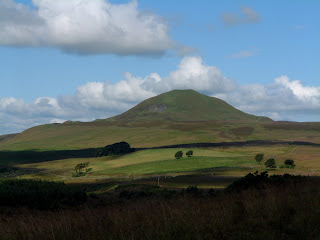 West Lomond from the road to Craigmead


The path to West Lomond is an absolute joy compared to the boggy horror-fest that it used to be. It speeds you on your way, the cone of West Lomond always visible ahead and wide open spaces to either side. 40 mins after leaving the car park, I was on the summit. 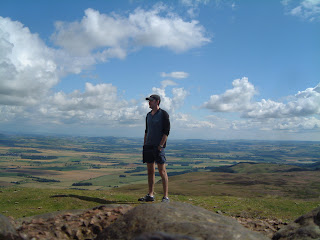 Some eedjit gettin' in the way of a good photie 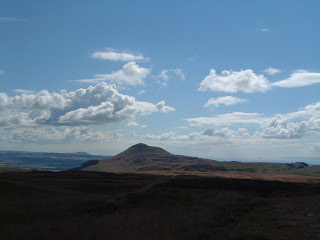 I took some photies and settled in to one of the big shelter cairns, snacking on Samosa, Beef Jerky and Jelly Babies. I'd been here dozens of times before, in all weathers, but it still felt good to be back. I was just finishing my food when somebody popped up near the trig; a young lass, out of breath and a bit red in the face. She was quickly joined by another. Then another but this time with a laddie in tow. Then an older guy. The proverbial Party of Five.


I nodded and waved then went back to polishing off the last of the jerky. When I next looked up, the older guy had produced a giant blue urn from his pack and was trying to balance it on top of the trig. Stepping slowly back, he then starts taking photies.


Now, I've seen enough piles of ash up there to know what was coming next so, not wanting to be covered in anybody's dead relative, I split pretty damn ricky tick.


The path was a lot busier on the walk back but I merrily exchanged "hiya"s and "crackin' day"'s with all and sundry. Naturally, no walk would be complete without a pair of IB's and, right enough, there they were. An older couple who completely ignored my cheery greeting. They couldnae quite ignore me stopping dead, turning round and muttering "F**k's sake" at their retreating backs tho'.


That was the only downer on an otherwise great wee outing.

And speaking of The Lomonds, it was nice to see them getting a mention in the Routes section of this month's Trail magazine.
Posted by Big Kev at 11:06 2 comments: