Show me a man who isn't drawn to an open fire and I'll show you a man with no soul. I'm not talking about pyromania either. There's something deeply primeval about fire and, for me at least, it was an integral part of childhood outdoor adventures. As kids, we wandered for miles, exploring the woods and glens that surrounded us. Sometimes we'd find a place that we wanted to linger in or come back to time and again and it was in those places that we'd set up "camp".

First order of business would be to get a fire going and that job always fell to me. A shallow pit would be dug, tinder and fuel gathered and the fire lit. We'd sit then around, watching the flames and take in our surroundings. Simple pleasures that today's kids seem to have lost. When it was time to go, the fire would be put out and turf put back on top of the pit. Even back then, "leave no trace" was the unspoken rule. No cans, no empty Buckie bottles or crisp packets. No sign that we'd ever been there.
These days, campfires are frowned upon but I may have found a compromise; the wood-burning stove. I'd seen them over at Podcast Bob's but at £20+, I wasn't tempted. Then I spotted some on Ebay, listed as "seconds" and a snip at less than £10 delivered so I took a chance.
It turned up yesterday, the box slightly battered but the stove itself was in perfect nick. And so, as the sun went down, it was off out into the garden for a "test run". A wee bit of paper and a few twigs were all it took to get a fire going. In what felt like no time at all, I had boiling water. I also had something else; a big, stupid grin on my face. I was a kid again. 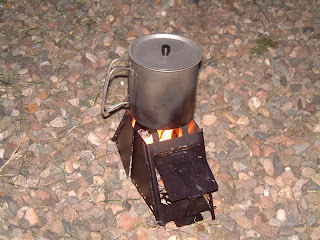 Bought a copy of Anquet Great Britain (North) a couple of weeks ago for £50, via Ebay. It's a revelation. Despite being IT literate and fond of most things geeky, I'd never considered getting into digital mapping. I like paper maps and have done for as long as I remember.*

I used the Ordnance Survey's OS Select service a couple of years ago and was impressed at the ability to choose an area to centre on. (Cruach Ardrain, in my case)

Anquet's another kettle of fish altogether. Hours of fun! I'd recently bought a decent printer (Canon Pixma iP4300) and a Garmin Geko 201 + data cable (£75, again via Ebay) so I'm now the proud owner of a complete "never get lost again" package.

The icing on the cake is the fact that TFMD has an A4 laminator. Oh, the joy :o)

I now have a pile of plastic-coated A4 maps, comprising my "hit list" of hills that I'll do this year AND, what better reason do I need for finally getting around to making Podcast Bob's "strapamaptome"?

So, when it's pishing down and blowing a gale outside, I can be inside, virtually wandering the hills and having a tremendously good time while I'm at it.

*The Future Mrs Duncan is, at this moment, in Ikea looking for a frame for my Bartholomews half-inch to the mile, map of Skye and Wester Ross. Cloth mounted, it's a thing of beauty.
Posted by Big Kev at 12:26 No comments:

The Power Of The Dog

Last Monday (7th) was exactly one year to the day that we lost Meg, our Border Collie-Spaniel cross. She was a great wee "hill dug" and we had some tremendous days out together. I still miss her and think about her every day. If you're not a dog person then you'll never understand the bond that exists between man and dog. Mans' best friend, indeed.

In fact, I can remember the exact date and time Meg died but couldn't tell you when my favourite Aunt passed away. I guess that makes me a dog person, right enough. 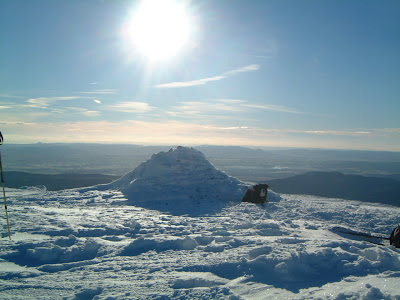 About 6 months before she died, Meg was operated on for Mammarian Cancer and I'd posted something about it on a thread on OM. The response was swift; messages of support from the dog owners and from folk who'd never owned a dog in their life. I posted a follow-up a couple of days after Meg's passing and again the response was heartfelt. They're good folk. Among the posts was one from Mal, an OM regular. He posted a poem by Rudyard Kipling and it said everything that needed to be said;

THE POWER OF THE DOG
Rudyard Kipling

There is sorrow enough in the natural way
From men and women to fill our day;
But when we are certain of sorrow in store,
Why do we always arrange for more?
Brothers and sisters I bid you beware
Of giving your heart to a dog to tear.

Buy a pup and your money will buy
Love unflinching that cannot lie.
Perfect passion and worship fed
By a kick in the ribs or a pat on the head.
Nevertheless it is hardly fair
To risk your heart for a dog to tear.

When the fourteen years that nature permits
Are closing in asthma or tumors or fits
And the vet's unspoken prescription runs
To lethal chambers, or loaded guns.
Then you will find--its your own affair
But you've given your heart to a dog to tear.

When the body that lived at your single will
When the whimper of welcome is stilled (how still!)
When the spirit that answered your every mood
Is gone--wherever it goes--for good,
You still discover how much you care
And will give your heart to a dog to tear.

We've sorrow enough in the natural way
When it comes to burying Christian clay.
Our loves are not given, but only lent,
At compound interest of cent per cent.
Though it is not always the case, I believe,
That the longer we've kept 'em the more do we grieve;
For when debts are payable, right or wrong,
A short time loan is as bad as a long.
So why in Heaven (before we are there)
Should we give our hearts to a dog to tear?
Posted by Big Kev at 10:26 No comments: