Summer in Scotland. It's a bit shite, really. And totally rubbish when it comes to walking up hills and such-like. It's either too hot, too wet or somewhere in between. And then there's the midgies. And the ticks.Thinking back, I never did very much between May and September.
So, fuck it. I'm staying local for the time being. Any spare time will be spent up at the allotment, growing stuff. It's a much more productive use of our time. Literally. The tatties and some of the salad stuff have been going down a treat. And the sense of satisfaction is easily on a par with gettin' tae the top of a hill and a day of digging is just as knackering :(
I like it so this'll be me until September. 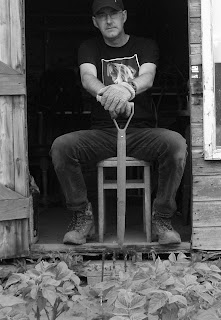 The Man Cave
There's been some talk of doing the Fife Coastal Path in a "section-hike" style, once the weather settles a bit, which'll be good. And I'll be heading back to the Cairngorms for a visit that's long overdue.

I'm trimming down the gear pile in the meantime, selling off tents'n'packs'n'stuff and getting it all back to some semblance of order. Only thing I actually intend buying is another of Sean's custom inners for the Hex; something lighter than the original Oooknest and with a bit more mesh.