The long walk in, and out again - Part 1

Friday's trip up to the Cairngorms NP wasn't going to be an exercise in peak-bagging but rather a recce mission. I asked The Boy a couple of weeks ago if he'd like to come "camping" with his old man and, to my surprise, he said "Aye". To my further delight, he insisted that it not be on an organised campsite but out in the hills somewhere.

Derry Lodge was the first thought that popped into my head but it's been a long time since I've been up that way so I decided to nip up and check it out.

Packing for an overnighter took a while (out of practice, you see?) but I got there in the end; packing and re-packing, refining and rejecting. I should point out that one of the other things I wanted to do this weekend was try out some newish kit, chief among them the OMM Mountain Mover. It wasn't until I was unpacking yesterday that I realised I'd taken the OMM Villain instead. Och well, the MM can come along next time. 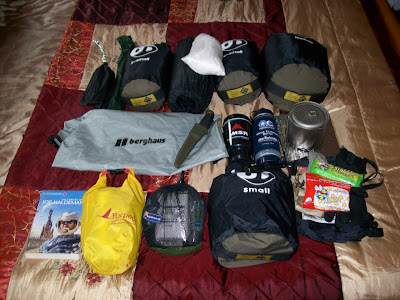 A couple of things, namely the Berghaus Sac Liner and the Big Agnes Air Core Pad, didn't make the final cut. The Frosts Mora Knife came along for "whittling" purposes :o)
So, with bag packed it was off to Braemar and a quick mootch around Braemar Mountain Sports. Some nice stuff in there and definitely worth a re-visit.

Eventually got to Linn of Dee at around 5pm and, after buying a ticket (£2 (coins only), thanks to Duncan for the heads-up) hoisted the pack, took a quick photie or 2 and then set off up the signposted path for Glen Lui. 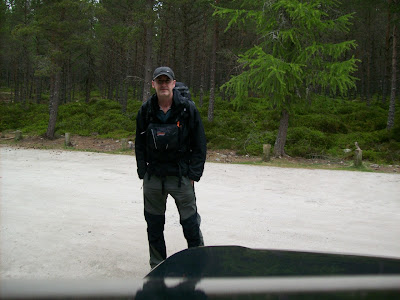 Self-portrait, with partial bonnet of my motor
The track up Glen Lui is a good one, speeding you away from the car park and on towards the hills. Loads of really good spots in the glen for a tent if you don't fancy walking very far.

In nae time, I'd reached Bob Scott's, but as bothies give me the "heebies", I moved quickly on. 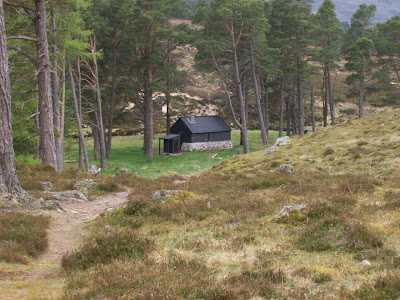 Pure Evil. "Aaaargh! Run away! Run away!"
Passing Derry Lodge, I could see there was a big group of kids at the bridge so, after exchanging cheery "Hiya"'s, I decided to seek out a relatively secluded wee spot away from any likely looking "D of E Here" pitches. At this point, my natural "I wonder what's up here" curiosity got the better of me and I started up the path on the left side of the river. Before I knew where I was, I was out of the trees and looking up a big, wide, empty glen. I knew there was a wee flat bit of grass near the bridge but, right on cue, some kids appeared. Sure enough, there were 3 tents there already. I walked up the glen a bit but it didn't look promising. 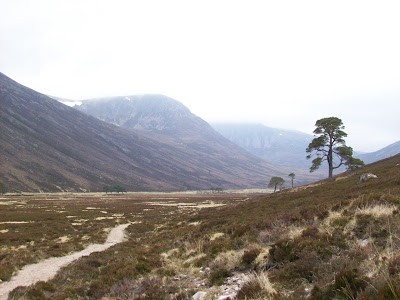 The world's best wild-camp is probably just around the corner
The wind was picking up and it was getting late so I turned round and headed back, passing the same group I'd seen at Derry so no prizes for guessing where they were going.

Half an hour later, I'd selected and cleared a pitch, set up the tent and had water on for a brew. 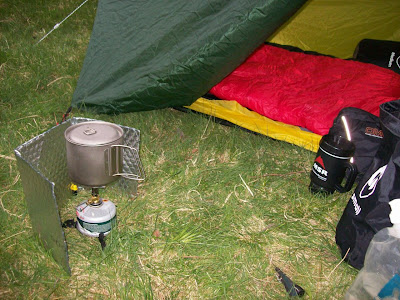 A sight I don't often see. Note use of TN Carbon Nails as windshield supports.
As I was sitting waiting for the water to boil, 2 young stags appeared about 50m away. It was, of course, at this point that the camera packed in. 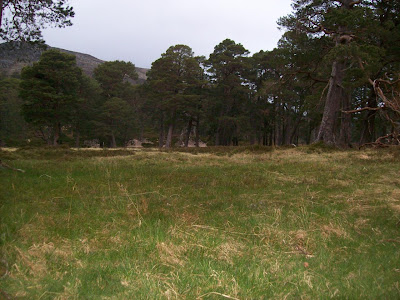 10 seconds after I took this, 2 deer walked out of the trees in the middle foreground. Honest.
The rest of the evening passed quickly; brews were drunk, tea was eaten (Expedition Foods Chicken Tikka which I turned into soup by adding too much water. Still tasty tho'), wandering about was done and entertainment provided by the 4 yahoos on the other side of the river with their big fire, a saw and copious amounts of alcohol. Idiots.

I slept well considering this was my first night in a tent in long, long time. I woke up at one point to what I thought was thunder but sounded to my sleepy brain like lots of hooves going past at the run. Could've been deer or just a dream. I went back out like a light regardless.

Coming up in Part 2; a day of happiness, deep joy, pain, exhuastion and a meeting of the real and virtual worlds.

That Expedition Foods Chicken Tikka is my current favourite. Camping is almost an excuse to eat it these days.

How did you find the Villain with a camping load?

Aye, the Tikka was lovely and I'll definitely get more.

The Villain was, once I'd fiddled with it a bit, superb and swallowed gear to the point that I ended up taking far too much. More than once I thought to myself, "Here, this Mountain Mover is the dug's doo-da's, so it is." What a tube :o)

Ach, they're the same colour...
The MM took a wee bit more setting up for me, the hipbelt's got an internal tilt adjuster which I found does make a difference. Once I had it dialled it was so comfortable. It's my winter camping pack and talkes the extra weight so well, the hipbelt is genius. Bottle pockets aren't as good as the Villain though.

Seeing some Honey Stinger in that pile of kit :o)

I'd seen the hipbelt thing but never played around with it. I will tho'.
Honey stingers? Aye, a whole box from Craig who was kind enough to throw in a couple of protein bars and some chews. Fantastic so they were. The nuun tabs were a revelation :o)