The long walk in, and out again - Part 2

It was only when I'd thrown my arms out a few times, searching in vain for The Future Mrs D', that I remembered where I was and how narrow the Laserlite is. (Note to self: Research wider tentage) TFMD and I have only spent a handful of nights apart in the last 5 years and her warm, wee bod' was sorely missed. I made a half-hearted attempt to snuggle down in the bag but the day was brightening and the thought of coffee finally got me moving.

I'd no sooner packed up the tent when the sun broke through the low cloud and I was able to finish off my brew, with my back against an old Scot's Pine, taking in some rays. Magic.

I'd no clear plan for the day but I knew that both Duncan and George would be in the vicinity of White Bridge around lunchtime and, after a quick look at the map, opted for a wander up Glen Luibeg towards Corrour and then out to White Bridge via Glen Dee.

I don't know who built the path up Luibeg but they deserve a hearty clap on the back cos' it's a cracker. The path, sunshine, trees, water and wildlife had me beaming like a madman by the time I reached the Luibeg bridge. Seriously. My face was aching. Everybody that passed by was happy with not an Ignorant Bastard among them. I think that might be a first.

Following the path round, The Devil's Boabie* hoaves into view and stays there. Every ounce of energy spent getting there is repaid a thousand fold. I felt immediately sorry for the many thousands of folk who must have passed by here in the clag and no' seen it. 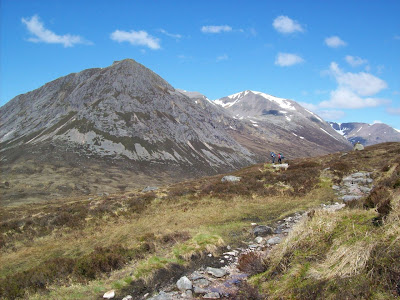 Fertile imaginations, the Gaels had.

I loitered a bit, taking it all in while having “Elevenses” (Beef Jerky) and slurping from the Aquagear Filter Bottle. It took a supreme effort of will to get up and tear myself away, heading directly downhill to pick up the Glen Dee track.

It was at this point that I noticed how warm the day was getting. Higher up, there'd been a cool breeze but that died away as I got lower. The path was lot rougher as well which made for hard-going. My enthusiasm had got the better of me and I was moving quite quickly which is probably why my left knee, which I've had bother with over the last few years, decided it was time to complain. The low grumble built to a throb and on to a steady scream. Not to be left out, my head started to pound, a million sweat glands went on strike and every alarm light went to red. Bugger! Skipping breakfast and no' drinking enough had caught up wi' me, big time. (5 hours+ since my last pee. “Well, hello there Mr Dehydration”) I'd “bonked”, and not in a good way.

So it was down to the river and some handy slabs where the next hour was passed eating and drinking like the proverbial horse; Jerky, Honey Stingers, oatcakes and Primula all washed down with copious quantities of Nuun-infused Highland water. A Buff, soaked in the Dee and wrapped around the offending joint sealed the deal. Sweet, blessed relief.

I was a new man by the time I set off, water bottles topped up and snacks to hand in the OMM chest pouch, and it seemed like no time when I arrived at the Chest Of Dee. 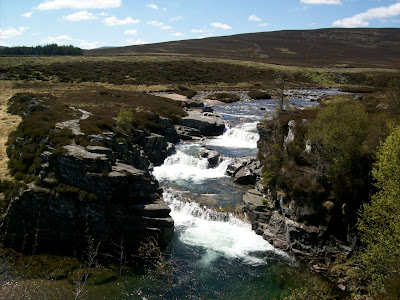 A quick photie and then the camera died. Again.

I could see a few figures milling about at White Bridge and, by the time I'd finished swearing at the camera, 2 of them had broken away and were heading towards me. My eyes were streaming a bit on account of the wind but I could just make out that one of them was wearing a light-coloured Tilley and sporting shades. “'allo. You Big Kev? Big Galloot?”. It was George, aka The London Backpacker, and his walking buddy Keith looking fresh and cheery after their long walk up from Blair Atholl. We passed a good few minutes blethering about the scenery, weather, the path conditions ahead and likely bothy population before exchanging “Cheerio's”, “All the best”'s and me promising to look out for Duncan and let him know they were just up ahead. Nice blokes, both. 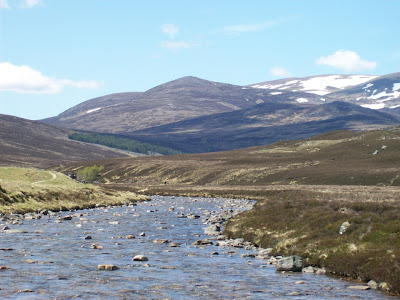 Almost exactly half an hour later, I was on the landrover track back to Linn of Dee, texting an ETA to TFMD when I noticed a familiar figure approaching; Duncan aka Aktoman. More handshakes and an impromtu Scottish Outdoors Bloggers mini-meet was in full-swing. More blethering about this and that and the next thing. I could've stood there all day, really I could but I was acutely aware that I was a) holding Duncan back when he still had a long way to go and b) stalling for time on account of an aching knee, the weather, and the track which looked like it went on forever. And so we went our separate ways; me heading for the car and Duncan to Corrour and what looked like a fantastic Sunday. (Full write-up here.) He's a good lad btw and every bit as tall as he looks on his blog :o)

Less than an hour later, I was in the car and heading for the Hungry Highlander and a portion of Whale** and Chips, washed down by a cold can of Irn Bru. Champing at the bit to get home to my honey, I only ate half, saving the rest for later. (Sorry dugs, way too nice to be classed as “leftovers”) 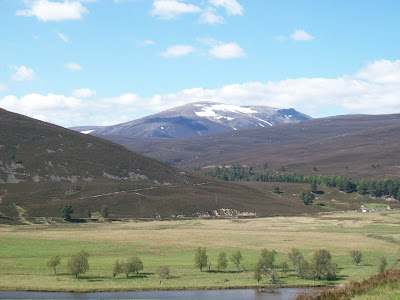 Heading back to Braemar

The old Mojo was there. I could feel it and F**k me if it didn't feel good.

Alright! (again)
That sounds like you had a blast.

I've done the no water thing. It's easy to forget, gadding about looking at the scenery and getting yourself all burst.

Here, I hope this is a precurser to a camptastic summer?

Aye, I had a tremendously good time and I'm buzzin' yet :o) The confidence in my abilities is coming back and I'm hoping to get out again this weekend. More planning and doing, less looking for excuses not to. That's the thing. :o)

Glad you had a good time. The weather was cracking. Lots of wildlife to keep the sharp-eyes happy, and if it rains, sod it and find a hidden patch to pitch the tent.

TBH, I joined the NTS/Outdoor membership purely so that the money would go on pathwork on the basis of what they'd done here. Good trailhead, with WC and information on the history of the area.

As to water, I do a "Withnail and I" variation. Every time I think of water, I drink some. Otherwise it is just too easy to forget. I've (hopefully) enough water in the Camelback, and drink from the Aquagear when I have a pack-off stop.

As to my height, me feet do reach the floor even though they spend most of the day in the shade.

pps: thanks for the kind words.