Back in my teenage years, I was in the school hillwalking club. We didn't have much in the way of kit at first; it was all jeans, wooly jumpers, bobble hats, anoraks and DMs. What we had in spades was enthusiasm and, more importantly, teachers that were happy to give up the odd weekend to drive a minibus full of teenagers the length and breadth of Scotland. (We made one foray to The Ponds, thought “Aye, it's quite nice” but decided the hills in our own back yard were much finer and never returned). 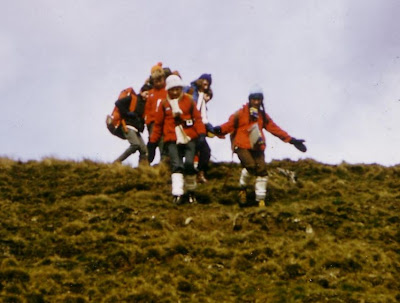 Hillwalking - 70's Style
There was nothing methodical about planning our hill days. Somebody would make a suggestion and, if met with general approval, that's where we went. We could be on The Lowthers one weekend and gallumphing across the Cairngorm plateau the next.


No such thing as risk assessment in those days either. The school were told we were going away for the weekend and we're taking the minibus and that was it. We knew what we needed to carry on our backs and were actively encouraged to be independent. We'd pile out of the bus, somebody would ask “Where we goin', Sir?” and a finger would be pointed in response. Wee groups would form up and away we'd go, bantering back and forth and generally having a jolly time of it. Nobody ever got lost and, only the once, did anybody get hurt; a turned ankle within sight of the car park. The casualty was evacuated on the back of Big Gordon. No helicopters required.

Fast forward 30 years and you find a man with an aversion to clubs of any kind but hillwalking clubs in particular. I'm no' sure why but I think what I get from being in the hills these days is a lot different to what I got out of it back then. These days I like my own company, the solitude and the freedom to make my own decisions; where to go and when and for how long. It's good. It'd be nice to share it
with someone now and again but it's not the end of the world.

Maybe it's the thought of sharing it with a bunch of relative strangers, hee-hawing about the place and crowding folk. I've had a few peaceful moments shattered by big groups and it's no' something I'd wish on others.


So, whenever I see a club diary on the interweb, I don't think “Ooo, that sounds good. I wonder if they'd let me join?”, it's more “Well, I know where I won't be going this weekend”.

Aye, the same. It's a constant battle between going your own way and then not being able to share stories about later and going with folk and the random element that brings.

My unreliability is legendary. I fear I'd be forever letting folk down.

I was the same. Work ensured I never turned up for anything. OM meets were a disaster.
You feel like such an idiot.

I'm a bit better these days. Most of the time...

Last time I made plans, somebody ended up in hospital and my jaunt went oot the window. Dangerous things, plans :o)