Maybe I've been watching too much Supernatural but I'm starting to think that my car's been taken over by a demon. I feel like every time I decide I'm going to head for the hills, she acts up. It can be anything from a worrying squeak to a flat out refusal to start. This time she's, as I put it, "Vibrating like a motherfucker".

I may have to start referring to her as Christine rather than The Warthog.

Yesterday was moot anyhow; we had the wedding photographer comin' round mid-afternoon so the scope of any activity would've been somewhat limited.

No biggie. It was a case of "Assume the position." and be awesome for a couple of hours. 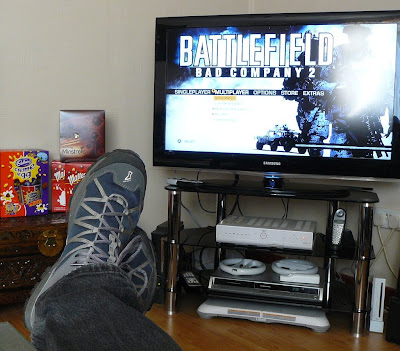 Mine's the Creme Egg one.
Plans are still being formulated in the meantime. Exploring Scottish Hill Tracks has come off the bookshelf and pages marked. And funds have been raised for the Vaude Power Lizard* via the sale of both the Laserlite and the Big Agnes SL1. Public transport options are also being taken into account :o)

I suppose that if you're no' keen on the name for the new tent you could always just abbreviate it to VPL.

Maybe I should have a Name The Tent competition?

C'mon, there are plenty of good tents out there, why get a Scutum?

Of course, if you want to suggest an alternative, I'm all ears :o)

Scutum is the Latin word for a Shield. Surely that's exactly what is required from a tent.

Blair Atholl -> Aviemore, iirc, there's a couple of river crossings. George (London Backpacker) and his made did it a couple of years back.

I tried Braemar -> Blair Atholl but was put off by the fast-flowing Dee at the east end of the Feshie. I've crossed a few times further up, where it widens near Geldie Lodge.

I'm King of the river crossings now; did about 6 in the last two weeks :-)

Good lad. I look forward to reading of your neo-colonialist rampage across the land of my birth :o)