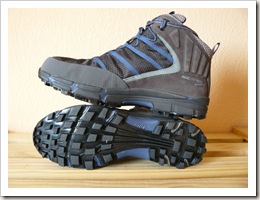 If I was looking for a pair mids for the winter? Such is my joy with other Inov-8 trail shoes I would get them. Bonus is they have the harder wearing compound on the sole and should last a while. Happy feet for you then :)

After my very disappointing winter with the Keen Targhee II's that have now sprung a leak I'm looking at these 390s too. Keep us informed as to their performance!

@Holdfast: Will do. Initial impressions are more than favourable. I'm hoping to put some decent mileage on them over the next couple of months so we'll see.

For your information: I have just returned a pair of 390's to Inov-8 as both boots leaked after very little wear and were very hard to get dry again. Inov-8 said the GTX membrane in both boots had failed and agreed to replace them. At my request they have sent me Roclite 370 boots instead - they are very similar, but have no waterproof membrane to fail!!!!

Thanks for that David. It'll be interesting to see if it's a widespread thing. They were cheap so, if they do go, they'll get relegated to dog-walking duites :o)

I've dug mine out for spring as well, and they seem to fit me better than they did last year?!
According to sources the membrane has a predicted lifespan of three months of active use...

Grippy though, I was on the fence previously, but I've really warmed to them again.
If you want a laugh, get the Roclite 288's when they come out, it's a 290 with everything removed except the sole, the lace and the Gore-Tex.

That's a bit pish tho' eh? I've got a pair of 8-9yr old Brasher Hillmaster GTX's sitting here that are still as waterproof as the day I bought them. Leather-lined tho' :o)

David & ptc* comments along with my own disappointing experience this winter with my Keen Targhee II Mids are leaning me towards the Rocky Gore-Tex socks route this spring. Much cheaper to replace if they fail!

Aye, the Rocky's are gaining in popularity. I might get some. Nothing makes me miserable faster than cold, wet feet.