I Want To Believe

Yes, I do. In fact, I think I do believe. What I know, is that The X Files is/was one of the finest Sci-Fi series ever shown on TV.

I was a Fanboy. I've seen every episode at least twice, and a few of them a lot more than that. I had Seasons 1-9 recorded on VHS, each tape labelled, in order and with the write-protect tab broken off. Then Ebay arrived and the DVD box sets were winging their way to my door.

Image then, the crushing disappointment that is the current film, The X Files: I Want To Believe. I'd seen the trailer and it looked good. I was looking forward to seeing it on the big screen and in surround-sound. As I sat there, bucket of popcorn and industrial-sized fizzy drink to hand, I started to feel strangely sad; sad for myself but also for everyone that had ever watched, worked on and loved The X Files. It's awful. Truly, truly dire. I could've cried. Thank F**k for Orange Wednesday. 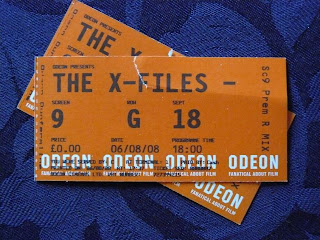 The Future Mrs D didn't like it either. Crushed, so I was.

So yesterday, we sat down to watch the first fillum, The X Files: Fight The Future, something which TFMD didn't even know existed. She enjoyed it . A lot. Declaring it "Really, really gid(sic)". It was nice to see it again. It made me feel much better. That's a proper film, that is.

When I saw the film advertised, and the trailer, my first thoughts were why?
I wasn't aware of such a ground swell begging/asking/demanding a second X-Files movie.
As far as I was concerned the X-Files boat sailed off years ago. I think it went the same way as Friends, down hill after season 3.
I think they tried to do a Babylon 5 with this movie, maybe it would of been thought of better if it had gone straight to tv instead of forcing people to pay the high cinema ticket price to see it.

Yes, I asked myself "Why?" too. Nobody asked me if I wanted another film. I would've said, "Only if you give it a huge budget and get Rob Bowman to direct." Straight to DVD is what BSG and Stargate are doing and it works.

Oh, and if you stopped watching at Season 3, you missed loads :o)

Big fan ... and then it moved to BBC1, and they started kicking it around. Out of sequence, different time, etc. Caught some more after that, but not a patch.

I think I caught the movie. Like washing the dishes, it doesn't stick in my memory.