Before posting about the Tallacs, I'd hunted through our photies for a shot of them in action. I knew there had to be some and I eventually found one today, on an old PC up in the loft. It was taken on Glas Maol back in September 2005 and if I don't look happy, it's because I wasn't. 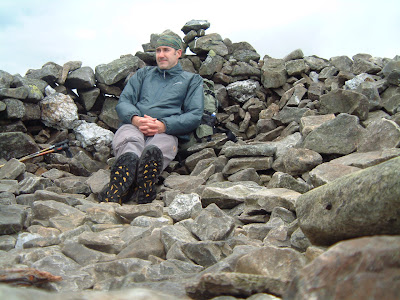 The author, looking down in the dumps. Note footwear, stealthy garb and pre-Carbonlite Leki's.

It sums up, for me, everything that's wrong with "bagging" Munros for the sake of a tick on a list. Firstly, it's a dull hill. There's nothing remarkable about it* but I'd set off to climb it as it was one of the last two Glenshee Munros that I hadn't done.

Outside of Winter, when a good dump of snow can hide a multitude of sins, the Glenshee Ski Centre is a mess. It's horrible. To get there, I'd taken a day off work, driven for nearly 2 hours and passed many other fine wee hills on the way. There were other people about but they were, with but one exception, to a man and woman, Ignorant Bastards. My cheery "Hiya's" brought forth scowls and, happily, a fair bit of shame-faced discomfiture. There were red lugs aplenty.

I've always maintained that you meet nicer folk on Corbetts and indeed any hill that disnae appear in the Reverend's Tables and this day proved it. In fact, it was nearly 2 years before I set foot on another Munro and in that time I had many a cheery encounter with folk who's opening gambit wisnae "How many's that then?".

*Except of course for the Mountain Hares which are huge and numerous. Oh awright, and the views. Sometimes.
Posted by Big Kev at 19:10

Glen Shee is like a deserted warzone without snow isn't it?

I was thinking about this recently, do I care if ever climb all the Munros? I don't think I do these days. It would be nice, but not essential. I mean, I took two days to climb Gairich last year. So not really feeling under pressure to get the job done :o)

Besides, if you climb them all then you'll never have a new one to look forward to.

I too have Glas Maol and t'other one to do to complete the Glen Shee Munros. But when I tried it, my new super-dooper carbon fibre tent pole snapped in two, so I headed back to town as I was sad.

I can't stand people who don't return greetings. They haven't a place on the hills IMO, and should go back to the towns where their unhappiness is de rigueur.

I should point out that I don't stand there like a loon, expecting folk to talk to me. A simple, "Awright?", "Fine day" or "Howzitgaun?" would suffice. Or even the slightly conspiritorial half smile and head nod of a passion shared. It's no' difficult.

I remember the pole-snapping thing btw. Between Glas Maol and it's neighbour, wasn't it? Bummer.

Ptc, I can't see myself finishing anytime in the next decade, or even the next four. I like to take my time and often go back to the same hill again and again. The multi-Munros in a day thing's never appealed. Besides, a beetroot coupon just disnae suit me :o)