One of the things I've meaning to do since me & The Boy's trip to the 'gorms was to put together a One Pot Kitchen for him. The stove he used was a wee bit too big to fit in the Alpkit MyTi Mug along with a gas canister, Buff and Spork.

Trail failed to deliver on their promise of a free Markill Hot Shot way back in April when I subscribed (more on that later) and I've been keeping a weather-eye open ever since. I was quite chuffed with myself when I bid on, and won, a Hot Shot that had been listed on Ebay. But that has come to nought, the seller coughing up nothing but excuses and lining herself up for my very first helping of negative feedback.

Last weekend, I found myself in Sterling Village, Tillicoutry (nr Stirling), accompanying The Future Mrs D on a mission of great importance. Luckily for me, there's a Mountain Warehouse there, formerly a Karrimor clearance outlet but now full of generic own-brand "stuff". Not the kind of place I'm known to frequent but I can usually kill 5 or 10 minutes mooching about inside. While wandering the aisles, a box caught my eye; a wee Coleman F1 stove. The price sticker looked wrong, way too cheap for what it was. I checked with the lassie on the till and it was indeed correct. "I'll take it", says I. 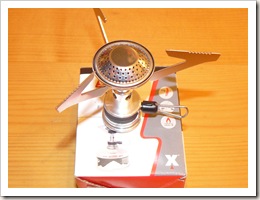 A result then. The F1 is lighter than the Markill by a long way. It's simple, cheap and folk seem to like it. I'm happy now :o)