Blot on the landscape

Of the several hills I can see from the house, Bishop Hill is the closest and there's never a day goes by that I don't spend a wee bit of time gazing up at it. A couple of months ago, I noticed an irregularity on the skyline; a dark, rectangular object on the crest of the hill. I peered at it but couldn't make it out. I thought maybe a part of the forestry up there had been clear-felled but the object was higher than the existing tree-line. A few days later, on a bright, sunny morning, I saw that the "object" had been topped with a large, white "golf ball". So, definitely man-made then.
To say it dominates the skyline would be a bit of an understatement. On a clear day, you can't miss it. And so, severely pissed-off, I set off on a bright and breezy day to get a closer look. It didn't take long. On the road to Scotlandwell, it dominates the view ahead; a green, metal tower with a white dome on top. You really can't miss it.
40 minutes after leaving the car, I was on the wee, un-named bump near White Craigs. The tower was about 10 meters away from the small cairn, just inside the plantation. I dug the camera out, only to find that the battery was flat. And so, rather than just turn around, I stomped off towards towards "The Bishop", occasionally looking back at the mast. That just made me even madder so I decided to concentrate on the walk. Wasn't that difficult as it turns out because the wind was so strong that it required a huge effort to keeping moving forwards rather than sideways.
The summit was too exposed to hang about on so I headed down the leeward side to get a spot of lunch and watch as lumps of dried moss and grass flew thru' the air like mini tumbleweed. Nice views of The Lomonds as well.
The walk back to the car was a case of "Don't look at it, just keep walking".
Glutton for punishment that I am,, I went back last Tuesday but with a fully charged camera this time. 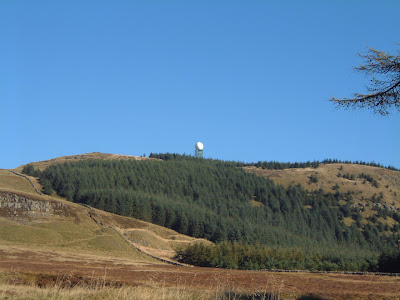 View from halfway up 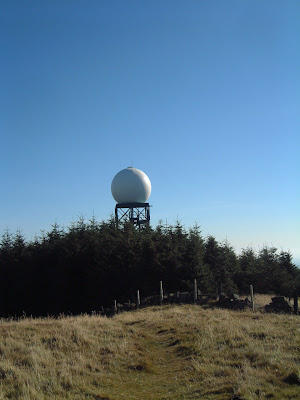 A stone's throw from the cairn 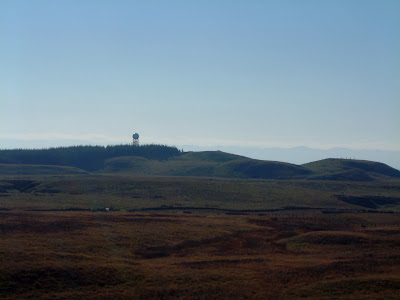 Looking back from Bishop Hill, The Pentlands just visible thru' the haze

From speaking to a local, it seems that the tower was constructed by men in "army uniform". That'll be alright then? I'm going to have a wee dig around and see if I can find out who put it there, what it is and whether they had planning permission. If it was the MOD, then they probably don't need any. We shall see.

This is the telly right now, a weather appliance apparently.
It's not proving popular.

Which channel was that, ptc*?

Reporting Scotland on BBC1 I think, I'm sure it was just before Diagnosis Murder?

Ah, daytime telly. I'll see if they repeat it tonight. The news that is. I was hoping somebody had painted the b*****d thing green but it's still brilliant white :o)