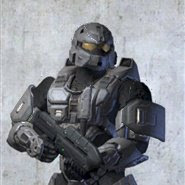 This is me, as I appear on the killing grounds of Halo 3. I've spent a lot of time there recently, mostly in what are called Big Team Battles. 16 players, 8 to a side, fighting it out across maps that once existed solely in the minds of those magnificent people at Bungie and now brought stunningly to life on my telly-box.

It's marvellous. Technology aside, I love the spontaneous camaraderie of 8 people, who may never have met in the real world, banding together to strive for a common goal. Or, as can happen, 8 people running around, getting in each other's way and just having a blast. 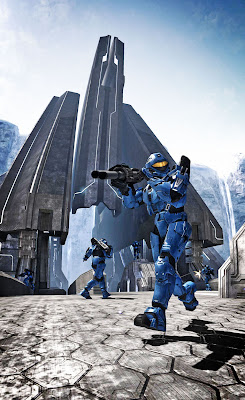 "Hold the middle" Copyright El Burrhito at TTL.
The picture above is an un-retouched, hi-def, screen grab. It reminds me of 80's sci-fi paperback cover art. Stunning, if you like that kind of thing. Which I do.

It's been Team Swat this weekend. Teams of 4, limited weapons and instant-kill headshots. It's fast and furious and just so much gosh-darn fun. Ach, it's not for everybody but whatever gets you through the day, right?

A lot of folk think it stands for British Summer Time. I don't. I think it's the short form for Bullshit. I mean, I feel bad enough as it is without them nicking an hour off me and screwing wi' my body-clock. I need my sleep, Goddamit!!!

I missed it by just over three weeks. Disnae seem like a year since I first decided to put my inane witterings on the interweb for all to see. A year of haphazard postings, dodgy photies and a smidgen of hill days.

Och well, there's always this year even tho' it hasnae exactly gotten off tae a flyer.
Please note the lack of a year's worth of stats btw. I rarely look at them. Wouldnae want to be accused of being a "Stat Hoor"* or a "Stat Tart".**
As for it being an ego-trip...... you be the judge.
Thanks for stopping by. Again.
*Statistics Whore - one who is more concerned with visitor numbers than content
**Statistics Tart - as above
Posted by Big Kev at 09:52 3 comments:

The New Guy didn't know what The Lurgey was. He'd never heard of it. I tried to explain, it's not a cold and it's not the flu' but something in-between. A general feeling of not-wellness, often manifesting as snotters and croaky voice, a cough that can be "productive" but also dry. Aching bones, zero energy and a desire to crawl back into bed and stay there. It ebbs and flows like a pestilential (is that even a word?) tide. You think you're on the mend and then it's back.

Photo of the week 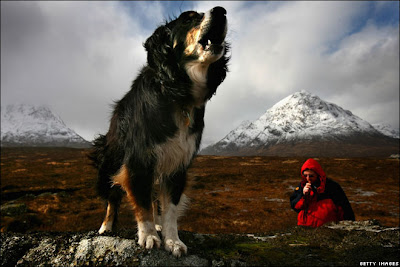 I saw this on the Beeb's Scotland page. It made me smile and, if I'm being honest, brought a wee lump to my throat. Apart from the brown markings, that could be oor Meg.

I'll have another wee hill dug one of these days, just not right now. Three's quite enough, thank you. Oh aye, and not forgetting the two step-dugs.
Posted by Big Kev at 11:06 No comments:

So Saturday was spent wandering the main drag for one end to the other. At the Southern end lies Escape Route, a bike shop but with plenty of other stuff to interest the likes of me. The lads in the shop were clearly enthusiastic and much banter was exchanged. I left with a "Life is Good" long-sleeve tee, a handful of Power Bars and a couple of Honey Stingers. I also put my name down for a pair of Haglos Rugged Mountain Pants. It would've been rude not to. It wasn't 'til I looked at the receipt later that I saw the 10% discount. They're good lads right enough.

Up the other end of town there's a coffee shop, Cafe Chocolate, if I remember correctly. Their cake selection is enormous and, I suspect, made on the premises. I can recommend the Caramel Shortcake and the Carrot Cake. Their coffee's no' bad either. I was positively vibrating from the sugar and caffiene by the time we left.

The rest of the day was spent loafing about our room, snacking and watching telly. Zulu Dawn, which I'd never seen, was surprisingly good.

After an expensive, but superb meal in the hotel, we crashed.

On Sunday, we packed up early and left but nipped up to Loch Faskally to get some photies. Ben Vrackie had had a wee dusting of snow overnight and looked great. We decided tho' that discretion was the better part of valour and voted to leave it for another day. 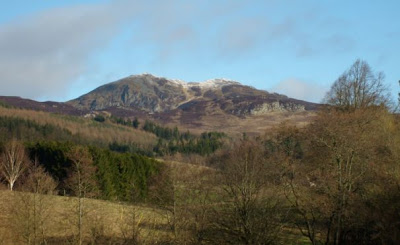 There were ducks aplenty and we were therefore heavily outnumbered. I don't trust ducks;they have beady little eyes so I stayed by the car. Just in case. 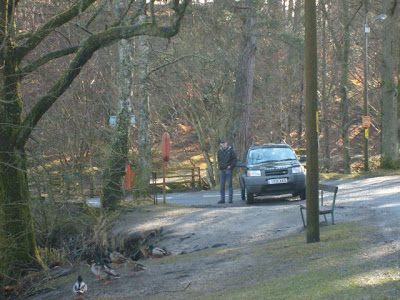 Two years. That's how long it is since we were last up this way. Oh, we'd whizzed by on the way to points further North and West but this was to be the first time we'd actually stopped in Pitlochry in an age.

We needed some downtime, a break from the daily grind of the 9 to 5'er and so a weekend away was proposed. After much searching (Scotland's pretty much shut until April) we settled on Pitlochry as a reasonable choice. It's only an hours drive away, there are hills and, just as importantly, shops if it's raining.

Some luxury was called for and so we took lodgings at the Pine Trees Hotel, a fine old Victorian pile, situated up on the hill above the toon. 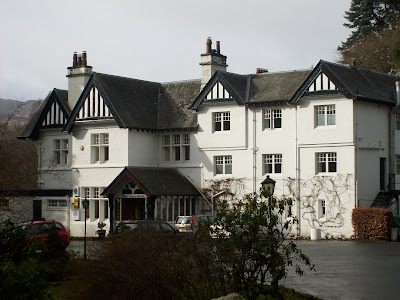 The drive up was "interesting"; pitch dark, gale force winds and lashing rain. Apart from nearly ending up in the Tummel (damn those shitty road markings) and getting lost (damn those shitty directions) we got there in pretty good time.

I'm no' a big fan of hotels but this one had a nice atmosphere, relaxed and no' too up itsel'. The staff, mostly Eastern European, were smiley, polite and attentive. Our famous Heelan Hospitality is imported these days, it seems.

We'd taken some basic walking gear on the premise that we'd have a dander up Ben Vrackie if the weather was reasonable but Saturday was a mixture of sunshine, freezing wind and showers. And so to Plan B, a wander round the shops. The only ones I was interested in were the pie shop and the gear shop. Or MacDonalds Brothers and Escape Route, respectively.

Macdonald's Steak Pies are superb and buying one while I was there was always part of the plan. They're no' exactly cheap but they're worth it. And you can even order online. Sometimes, I really, really love the internet. 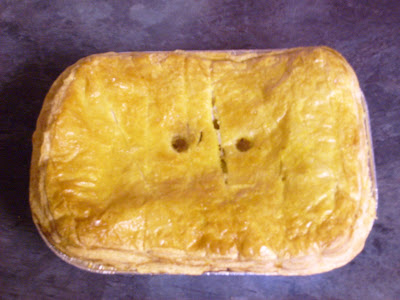 A Macdonald's Steak Pie in all its' glory 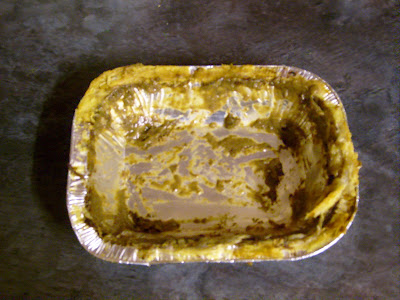 An empty Macdonald's Steak Pie Dish in all its' glory. Photo taken on Sunday, just after tea time.

Aye well, it had to happen sooner or later. I thought I did quite well, lasting a whole 2 months before signing up to Xbox Live. It's now a week later. A week of playing Halo3 and rising to the rank of Sergeant - Grade 2.

Xbox Live is great. It's like Web 2.0 with guns. You get to meet people from many different countries and cultures and then engage them in battle. Or, and this is my favourite bit, team up and fight alongside them against complete strangers.
And it's only £5 a month. A fiver to kick whiney, American teenagers' asses for hours on end*. What's not to like?
It's a terrible distraction tho' and I can only apologise for the lack of any activity on the blogging front. Normal service will be resumed shortly.
Coming soon, "Pitlochry Redux - A tale of hills unclimbed, pies and killer ducks".
*Or, by turns, have your ass kicked by little girls with too much time on their hands.
Posted by Big Kev at 13:05 No comments: