Well, mostly Green actually but with a bit of Black thrown in for good measure. I went for a walk yesterday!!! I know, I know, it's most unlike me but check this out:
1. Took Friday off and, after dropping the kids at school, went in by Asda and bought hill food.
2. Had food ready to go and my bag packed before I went to bed.
3. I'd only a vague idea of where I wanted to go but I thought I'd head up the A9 and stop wherever.
4. Up with the lark and out the door at 7:40am
5. Zoomed up the A9 and parked at Balsporran by 9:30. (OK, so I overshot and ended up in Dalwhinnie but I was bursting so a quick visit to the public loos was in order anyway).
After the requisite faffing about with my pack, map, food and a quick coffee and a banana, I was off by 10am and heading for Geal Charn (gyal chaarn). The sky was a beautiful cloudless blue with a bit of a chilly wind but the way ahead was clear and the path was good. An hour later, I was on the summit, sharing the shelter cairn with two lovely wifies from Glasgow. 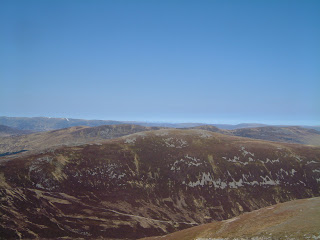 Geal Charn from A'Mharconaich
Glasgow folk are great and, even for an anti-social git like me, easy to talk to. Turns out this was their first outing in an age as well. We sat for a bit, comparing the view to the map and agreeing that it was an altogether fantastic day to be out on the hills. A couple of older guys that I'd passed on the way up ( I was ready to say "hello" but, as I drew level, they stopped and turned their backs to me) arrived and, please forgive me Dear Reader, I ignored their greetings. And their request for somebody to take their photie. I know 2 wrongs don't make a right but how much effort does it take to say "hello" FFS? OK, I know it gets a bit wearing on busy hills but I met six people all day. No need.
That was the ladie's cue to leave, followed shortly by the IB's.* I lingered for a bit, taking a few photies and absorbing the atmosphere. 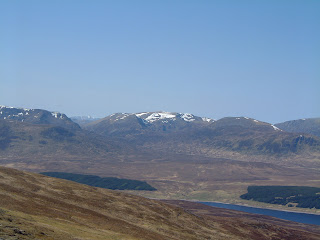 The Ben Alder group of hills.
After about 20 mins I was up and heading for A'Mharconaich (a varkaneech). I caught up with the ladies on the lower slopes but I found myself slowing down to let the IB's stay ahead. I was passed by a hill runner (Cheery "hiya's" were exchanged) and then I was on A'Mharconaich's broad ridge. Dawdled for a bit taking photies and the off towards the summit. When I got there, the IB's were ensconced in the shelter cairn so, after some mutual ignoring, I went downslope a wee bit and found a nice wee spot out of the wind. Hung about there for about half an hour, eating Samosa's and grinning like a loon.
Then it was a case of heading downhill, stopping occasionally to look back at where I'd been. 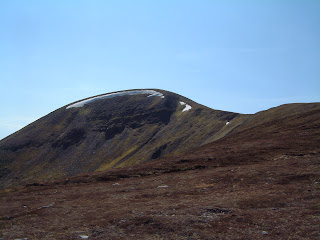 Looking back at A'Mharconaich
The descent path went from stony, to slippy, to full-on bog-fest but it was still enjoyable. Met one guy on his way up and again much pleasantries were exchanged. Actually, I met his dug first; a big Chocolate Lab that stopped to say hello and get a bit of hand-licking in. Back at the car by 2pm, sunburt and elated.
I hope I can keep the momentum going here because it felt good to get my "game face" on and get out there and do the thing I love.
Great stuff!!!
*IB's = Ignorant Bastards
Posted by Big Kev at 11:08 1 comment:

Over the sea to Skye Part II

Ok, so no hills were climbed but that doesn't matter. Just being on Skye for a whole week was deeply satisfying in a "good for the soul" kind of way. Lovely wee cottage with great views, great company, an open fire and a Rayburn to cook on. Even the weather was kind; glorious sunshine nearly every day. 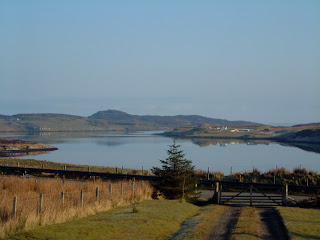 I actually enjoyed the drive up and back, all five and a half hours of it, because there's just so much damn fine scenery to look at. And the roads were relatively quiet, probably as it was the week before the English Easter Bank Holiday. Different story coming back; a steady stream of traffic heading north on the A9. Suckers :o)

Something I haven't experienced for a long time was a proper, clear night sky, free from street lighting. It was jaw-droppingly grand and, for the first time ever, I could actually see satellites with the naked eye. (Caused a wee bit of a UFO alert at first but they were appearing with such regularity that fears of alien invasion were quickly discounted).

And then there was the deer. The buggers were forever creeping about in the field opposite, dimly visible under the full moon but never close enough for us to get a good look until, that is, we surprised them by getting up early. 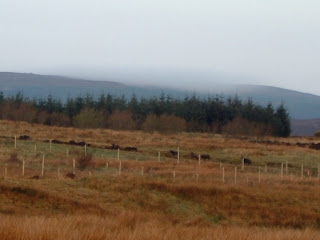 On our last day, we stood and watched them as they headed back into the trees for the day. TFMD had never seen Red Deer in the wild so it was a special moment and something we'll remember for a long time to come. A perfect end to a perfect week.
Posted by Big Kev at 11:22 No comments: